Since 1908, the St. Patrick’s Day Parade has been a fixture in Rolla, Missouri’s history.  Luckily, our local Hardee’s has been a part of this celebration for many years.  This year was like no other and the team there worked all day to serve parade-goers breakfast, lunch, and dinner.  Even though the weather was cold, the turnout was huge and Hardee’s was packed!  Our Hummer even made an appearance in the parade and was a big hit.  Way to go, Team Rolla! 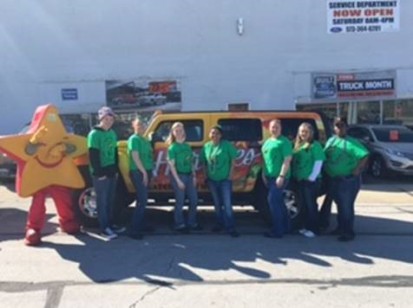 Earlier this month, our Hardee’s store in Cartersville, Georgia teamed up with Quality Championship Wrestling to sponsor an event featuring WWE Hall of Fame Member, Bullet Bob Armstrong & 8 Time former World Tag Team Champion, One Half of the The Rock n Roll Express Robert Gibson!  The event was held on the eve of the WWE Hall of Fame Ceremony.  Both wrestlers made appearances at the store for lunch and held a meet and great with fans.  Bullet Bob even let some youngsters try on his WWE Hall of Fame Ring and helped promote Hardee’s within the community at the main event.  The event at Stars Academy was attended by over 400 fans and our very own Happy Star! 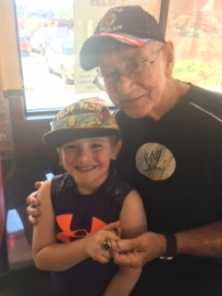 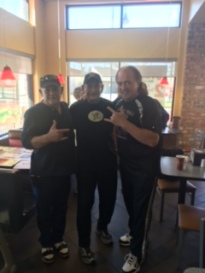 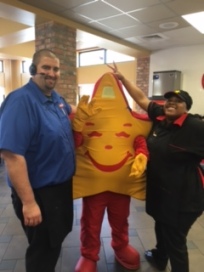 As I write this, our Annual Biscuit Bakeoff Finals are taking place in St. Louis!  I will announce the winner and share photos from the event in next month’s addition, but here is a quick read featured in her local paper about one of our regional winners competing today from Franklin, GA.  Good luck, Alma!

(Franklin, GA) — Who bakes the best Hardee’s® Made from Scratch™ Biscuits in America? It just might be Alma Van Vorst from the local Hardee’s right here in Franklin. 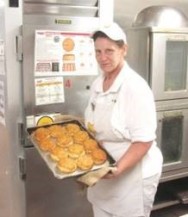 Alma turned up the kitchen heat and beat out all the other bakers in both her district and regional competitions recently and as a result she, along with her general manager district manager, are headed to St. Louis, Missouri this week where she will participate in the 2016 Hardee’s Biscuit Baker Challenge, an internal competition where Hardee’s seeks to find and honor their top biscuit baker.

The local biscuit connoisseur will compete Thursday morning at the Hardee’s headquarters against some of the top biscuit bakers in the entire company for the coveted title.

Alma is the first biscuit baker from her district or region to advance this far in the national competition and she will have plenty of people rooting for her this week as she attempts to make that ideal batch of Hardee’s® Made from Scratch™ Biscuits.

Surprisingly, Alma has only been making biscuits since she joined the team at the local restaurant less than a year ago.

She moved to the Franklin area to be near her daughter after her husband passed away in late 2013, and before that she only baked for her family.

Biscuit bakers are judged on their knowledge of Hardee’s biscuit procedures and standards as well as on their ability to prepare and bake a batch of Made from Scratch biscuits to performance standards and expectations. Baked biscuits are evaluated and judged on appearance, height, weight, diameter, texture, color and, of course, taste.

Everyone around her has recognized Alma’s unique knack for rolling out the best biscuits.

Shift leader Becky Carroll has been with the Franklin Hardee’s since it first opened in 1988 and says that Alma is definitely the best she has ever worked with.

“Alma has a lot of self-pride in what she does and her goal is to make sure that everybody loves the food she produces — she takes it very personal,” says Hollins. “She is just a wonderful person. She’s a natural. Baking is a science — not just everyone can jump in and do it — you just have to have that special touch and Alma has that.”

Hardee’s signature Made from Scratch biscuits have been helping folks of all ages rise and shine for over 30 years. The world has changed a lot since the mid-1970s, but not Hardee’s biscuits.

They are still made fresh daily by dedicated biscuit bakers who arrive to work in the early morning hours to prepare and roll the dough by hand, and bake the biscuits to their signature fluffy texture and golden-brown color.

Selling well over 300 million biscuits a year, Hardee’s is famous for its biscuit-centric breakfast, which accounts for nearly half of the chain’s overall sales, among the highest in the industry.

Because of this, Hardee’s biscuit bakers such as Alma, who each bake upwards of 800 biscuits a day, hold a highly esteemed position in the company; they are responsible for ensuring that the celebrated breakfast item is prepared consistently and held to the restaurant’s rigorous quality standards.

“I’m just so proud of Alma and excited for her to have this tremendous opportunity to represent our Franklin Hardee’s this week,” says restaurant general manager Sarah Barton. “She’s a hard worker and a perfectionist — if she does something, she does it right. She really deserves this moment.”

The trio of Van Vorst, Barton, and Hollins will fly into St. Louis tomorrow to prepare for the big competition which will take place Thursday morning.

Alma is both nervous and excited for her one in a lifetime opportunity.

According to her daughter, Alma’s biscuits have a special ingredient not found in the company procedures.

“My daughter says I make my biscuits with love,” Alma said in a phone interview late Monday. “But I just follow the procedures — it’s the way you knead the dough that is the real key to making the best biscuits.”

With the best-of-the-best competing, the competition at the company headquarters should be intense, but Alma will have a huge contingent of friends, family, and co-workers rooting for her back in Heard County.

Drivers on Franklin Parkway will see the reader board outside the Franklin location has a congratulatory message posted for Alma this week.

Stay tuned to HeardCitizen.com for a full report on Alma’s trip to the Nationals.